Understanding the Pathophysiology of Liver Disease

The liver parenchyma is composed of small lobules of a roughly hexagonal shape with portal tracts at the apices. Inside the lobules, the hepatocytes are arranged as cords of cells connecting the portal tracts in the periphery to the central veins (terminal branch of hepatic veins).

Between cords of hepatocytes are a specialized capillary system called hepatic sinusoids, which are perfused with blood from the hepatic artery and portal vein. Products of hepatocytes drain into the bile canaliculi which in turn combine to form the bile duct system. Bile ductules can be seen by light microscopy in the portal tracts in which there is also an hepatic artery and a portal vein branch (thereby, the term portal "triad"). 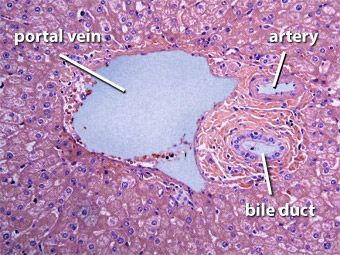